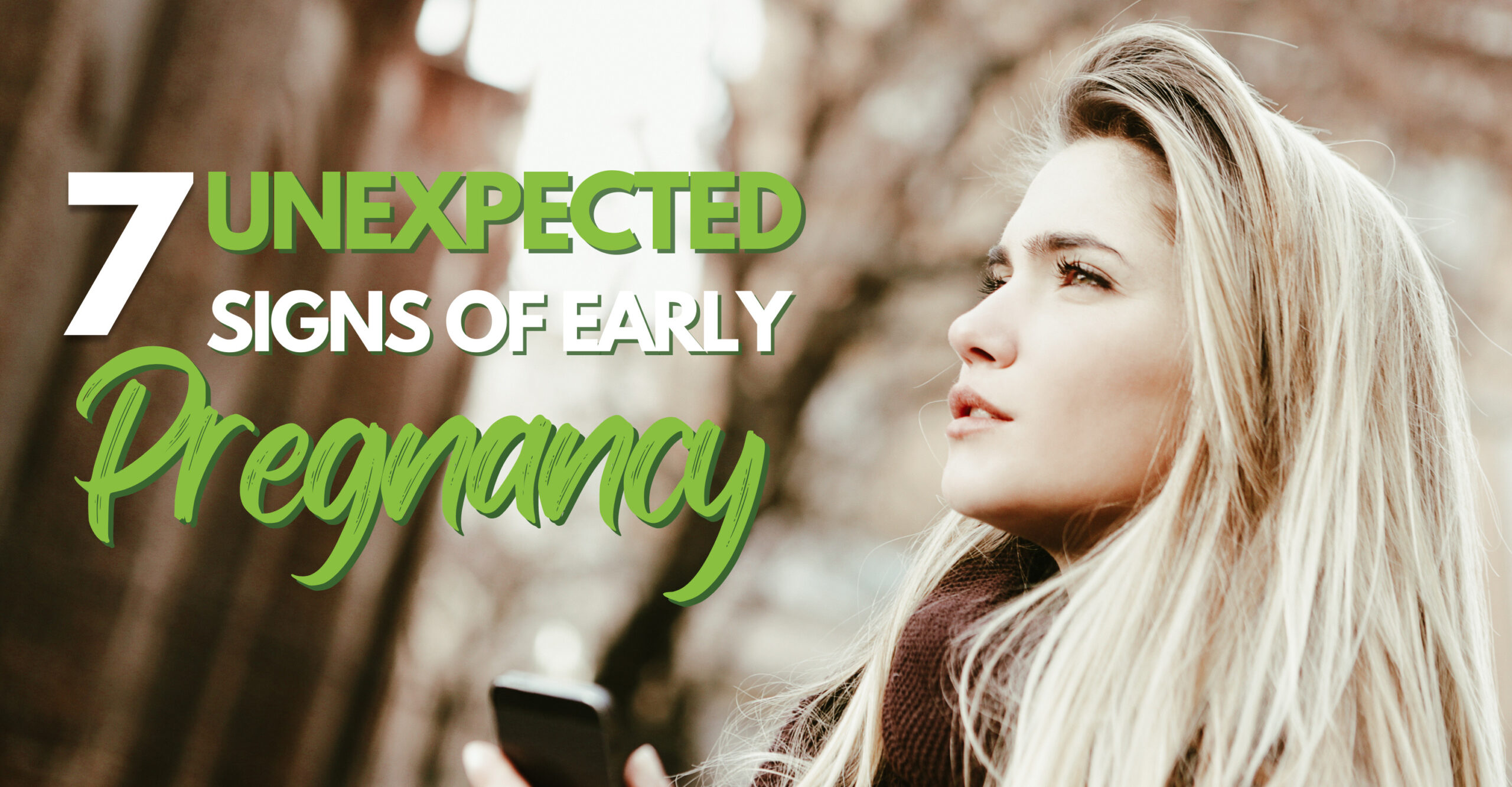 A missed period, nausea, and tender breasts can all be signs of early pregnancy, but you probably already knew that. On top of that though, there are other symptoms that could indicate that a woman is pregnant. In this article, we are going to review 7 unexpected signs of early pregnancy and explain why they happen. However, remember that a pregnancy test is the only way to be certain. Our tests are lab-certified and provide accurate results in no time. If you suspect that you might be pregnant, we encourage you to make an appointment.

Unexpected sign #1: Waking up feeling warm in the morning

Each month, a woman’s body releases an egg that can then be fertilized by a sperm to create a new human being. This process is called ovulation. When ovulation takes place, her body temperature rises slightly due to the hormone progesterone. This means that she may wake up feeling warmer than usual. If fertilization doesn’t occur, that temperature will reverse to normal once she starts a period. So how is this linked to pregnancy? Well, if she becomes pregnant during that cycle, her body temperature will stay elevated. The corpus luteum, which is a mass of cells formed in an ovary, will continue to release progesterone for the next 3 months until the placenta takes over.

A woman may feel dizzy early on in pregnancy due to lower blood pressure. In a nutshell, the pregnancy hormone relaxin makes her blood vessels relax so that more blood can be directed toward her uterus. This blood provides oxygen and nutrients to the developing baby. In addition to that, blood volume increases significantly within the first few weeks of pregnancy. Indeed, in the first trimester alone, studies have shown that plasma volume increased by 6%. By the end of pregnancy, a woman’s blood volume may be 30 to 50% higher than before pregnancy. All this extra blood means that her heart needs to work harder, which can make her feel lightheaded. Drinking plenty of fluids and eating regular meals can help in reducing dizziness. On the other hand, note that dizziness in early pregnancy might also be a sign of an ectopic pregnancy. Since an ectopic pregnancy can be life-threatening, we encourage every woman to see her doctor.

On top of feeling congested, nosebleeds may also be a sign of early pregnancy. To understand why it happens, it’s important to know that the blood vessels in your nose are very delicate and can burst easily. Therefore, congestion can irritate those vessels and make them bleed. In the same way, the increased blood volume during pregnancy puts a lot of pressure on these blood vessels, which can result in nosebleeds. To sum it up, this symptom is linked, once more, to the changes in hormones and how they affect a pregnant woman’s body.

GI tract issues such as constipation and diarrhea are common early in pregnancy. When it comes to the former, the pregnancy hormone progesterone can slow down your GI tract, thus causing constipation. At other times, these big hormonal changes can lead to the opposite problem: diarrhea. Neither of them is dangerous on their own, but if they become serious or the woman notices additional symptoms such as losing a lot of weight or being extremely fatigued, then she should contact her doctor.

Pregnancy affects a woman’s sense of smell as well as her sense of taste. One of the symptoms she might notice early on is a metallic taste in the mouth, sometimes also described as “sour”. The medical term for it is “dysgeusia” and experts believe that it is caused by a change in hormone levels during pregnancy, estrogen in particular. For some women, it happens in combination with morning sickness or nausea. And just like nausea, it should go away by itself when she reaches the second trimester of pregnancy. In the meantime, eating certain foods can help reduce the bad taste, such as citrus fruit, mint, or ginger.

Lung capacity is the amount of air that your lungs can hold. Starting early in pregnancy and later on, lung capacity increases due to higher levels of the pregnancy hormone progesterone. This is a necessary mechanism that a woman’s body adopts in order to be able to carry the right amount of oxygen to her developing baby. But it can make her feel out of breath as a result, since she is breathing more often. This symptom should be mild and isn’t dangerous for her or her baby. However, if she notices any other symptoms that accompany shortness of breath she should contact her doctor. These could be a rapid pulse, chest pain, or blueness around the lips, fingers, or toes.

What about being more likely to get sick in early pregnancy?

For a while, scientists believed that a pregnant woman’s immune system went into hibernation mode in order to protect the growing baby. Therefore, the assumption was that she would be more likely to get sick. Now we know that it’s not true, and that actually, the immune system tends to be more aggressive at the beginning of a pregnancy. So being more vulnerable to viruses and bacteria is not a symptom of early pregnancy. However, it’s possible that if a pregnant woman gets sick, she will experience more symptoms such as fever, due to the fact that her immune system is fighting harder against the microscopic invader.

As a reminder, none of these symptoms are specific to pregnancy, which is why they don’t necessarily mean that you are pregnant. But if you have any doubts and think that you could potentially be pregnant, it doesn’t have to cost you anything to check. Make an appointment with Lifeline now by clicking here. We will test for pregnancy and if the test is positive, we will confirm with an ultrasound, also provided to you at no cost.

You Are Here: Home » Pregnancy » 7 Unexpected Signs of Early Pregnancy